We are delighted that several of the people who were involved with the project in 1996 will be joining us on Saturday including Jahmeki from The Hut Parent and Toddler Group, Amanda Lebus the Artist who worked with pupils from Miles Coverdale Primary and St Stephen’s Primary School and Mrs Southerden who was a teacher at Miles Coverdale Primary School.Sue Ingham, who was director at Hammersmith Urban Studies Centre (now Urbanwise.London) said, ‘This project is a testament to how effective long term involvement in environmental change can be. It is heart warming to see the local community coming together yet again to celebrate what has been achieved.”

Other familiar faces who will be attending will be Lu the drummer, Cathy Maund Director of HCGA and some of the former pupils who took part in the project. The capsule was due to have been opened in 2020 but was delayed due to the pandemic. It is particularly appropriate to be doing the event in the lead up to COP26 Conference as both Urbanwise London and HCGA have been working on issues of sustainability in the borough for more than 30 years. Later in the year we hope to work with current pupils from Miles Coverdale school and St Stephen’s Primary to look at what 21st Century items should be put in the next time capsule.

The street will be closed to cars to allow children to play fun street games led by staff from London Sports Trust, there will be Caribbean food: chicken, rice and peas with vegan options too; tea and cakes; pond dipping and environmental nature activities for children and adults! Come and join in the fun for all the family! 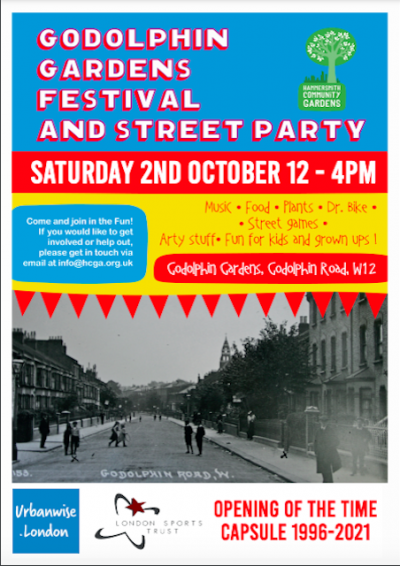