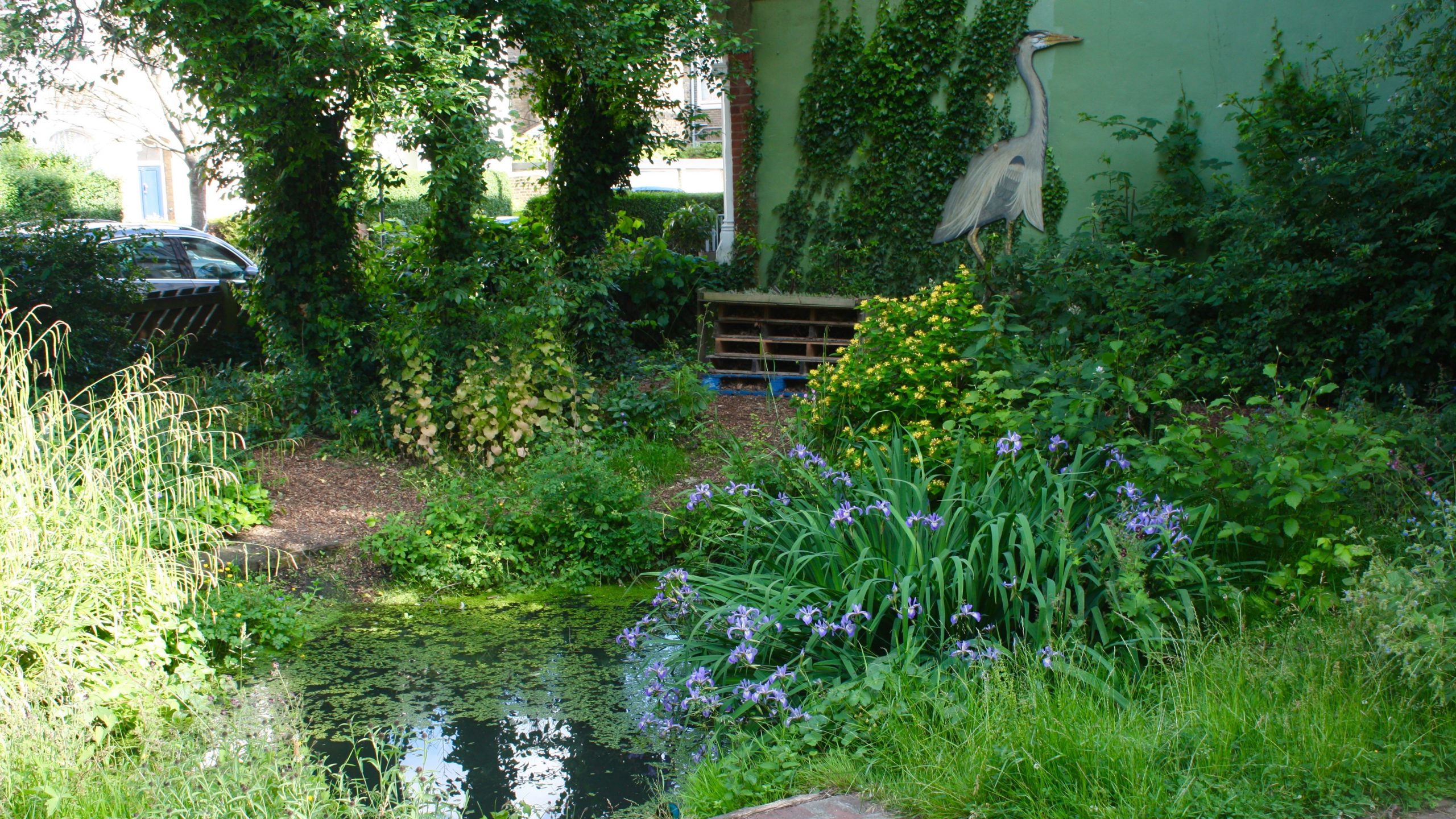 Following on from the previous newsletter about Ravenscourt Park and Glasshouses, we thought we would provide an insight into the two community gardens that HCGA manages in Hammersmith and Fulham.

Both of the community gardens are former World War Two, Blitz sites and were created on areas of open land after the war. In the immediate post war period, both sites had prefabricated houses built on them that were later demolished. Originally, Loris and Godolphin sites were managed by two separate organisations but later they merged to form one charity, Hammersmith Community Gardens (HCGA) in 1985. 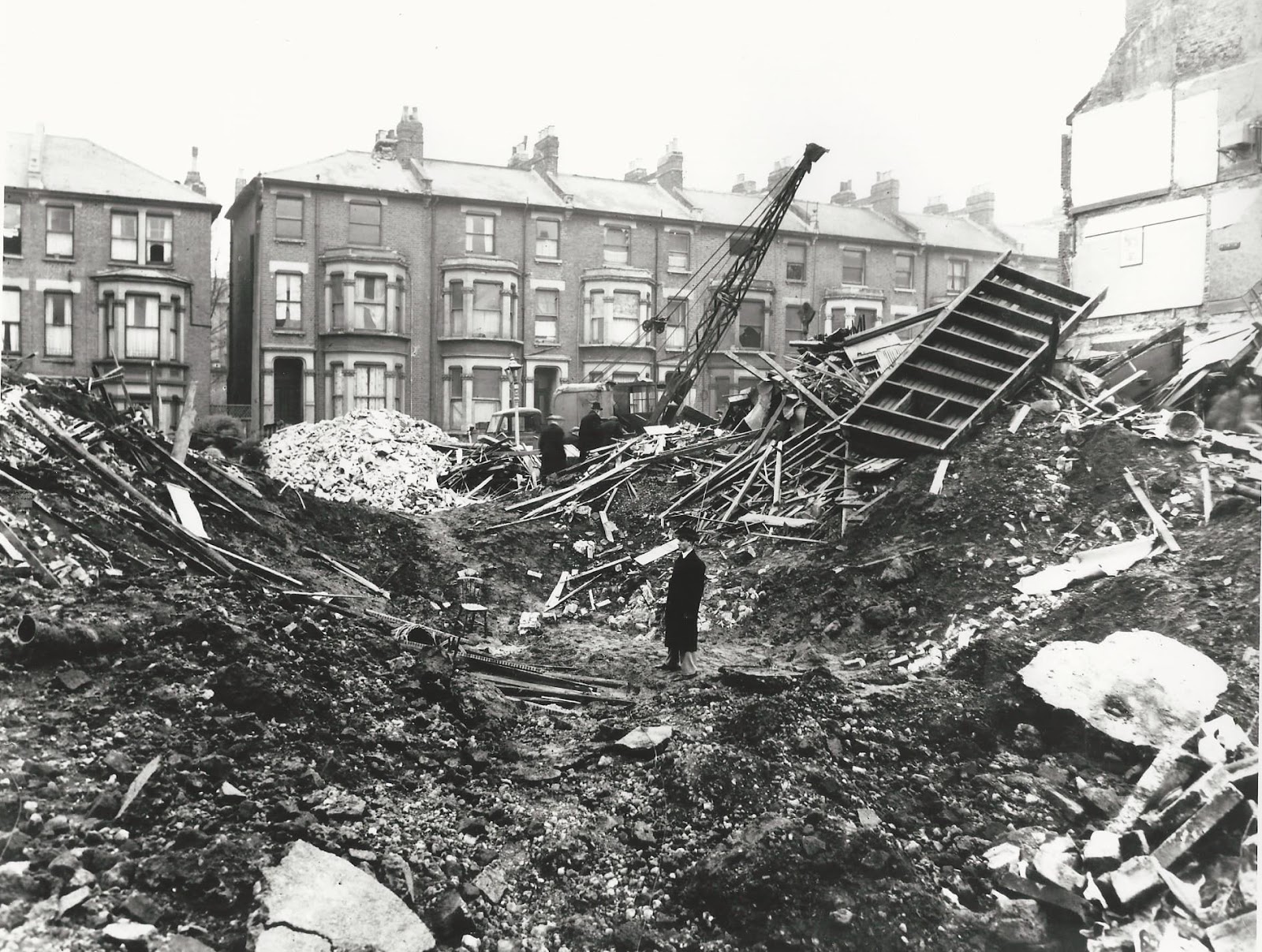 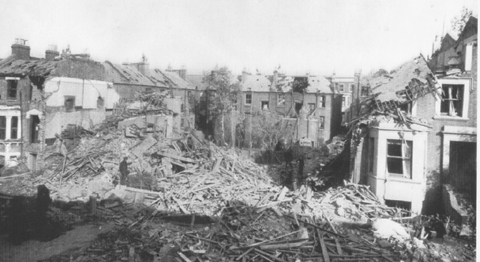 Godolphin Garden Site after The Blitz in 1944

Loris Garden: Then and Now 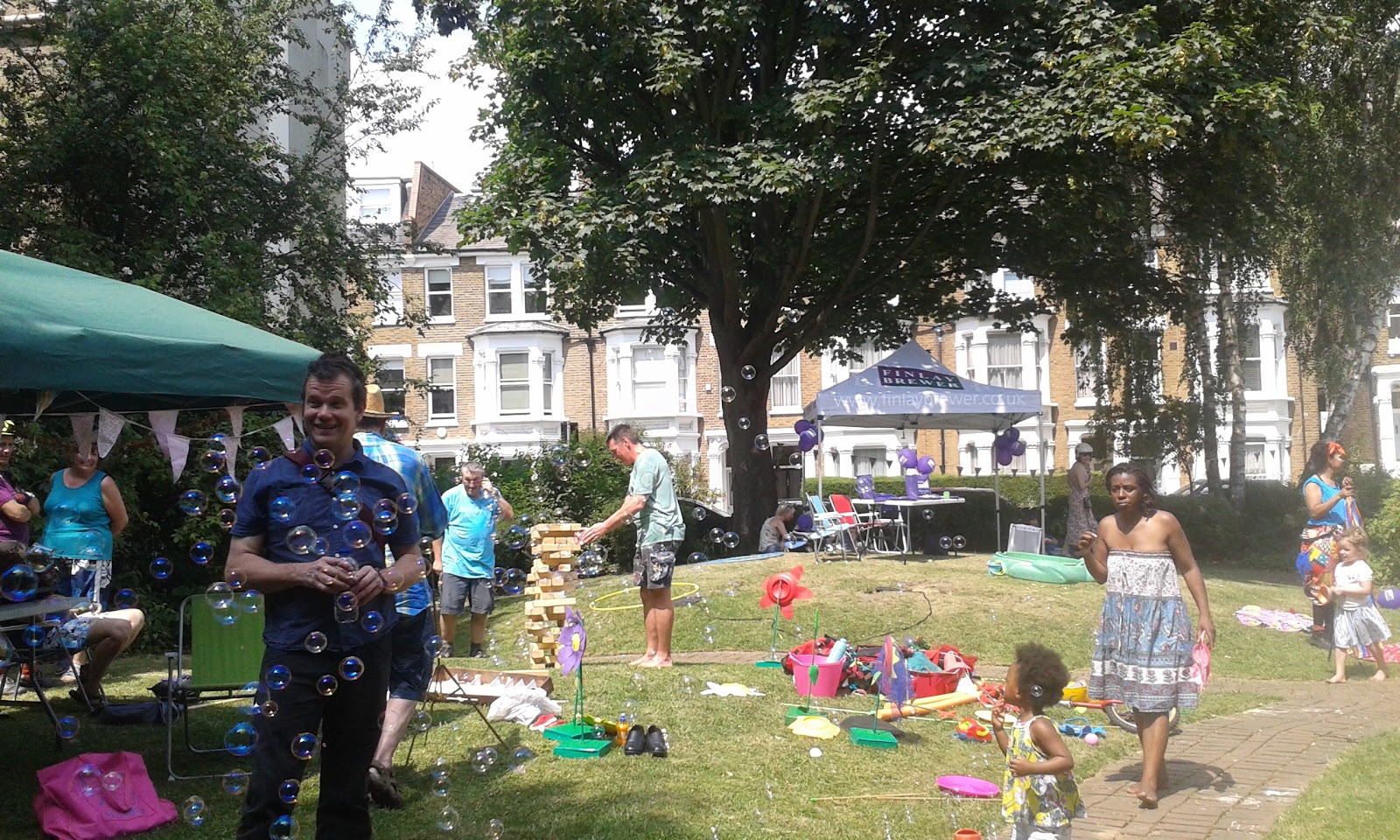 A Summer Party in Loris Garden

The site’s garden is divided into three main parts. There is a mature garden with a wildlife pond, a small woodland, a grassy, hilly area and formal borders. On the gable end of a house, there is a mural of the Cork and Kerry Mountains painted by Russell Burrell in 1979. As part of a celebration of the millennium, he returned to repaint the artwork in 2000. In between both gardens, there is a central paved area which was the former junction of Loris Road and Batoum Gardens and there is also a natural play area that was created in 2009. 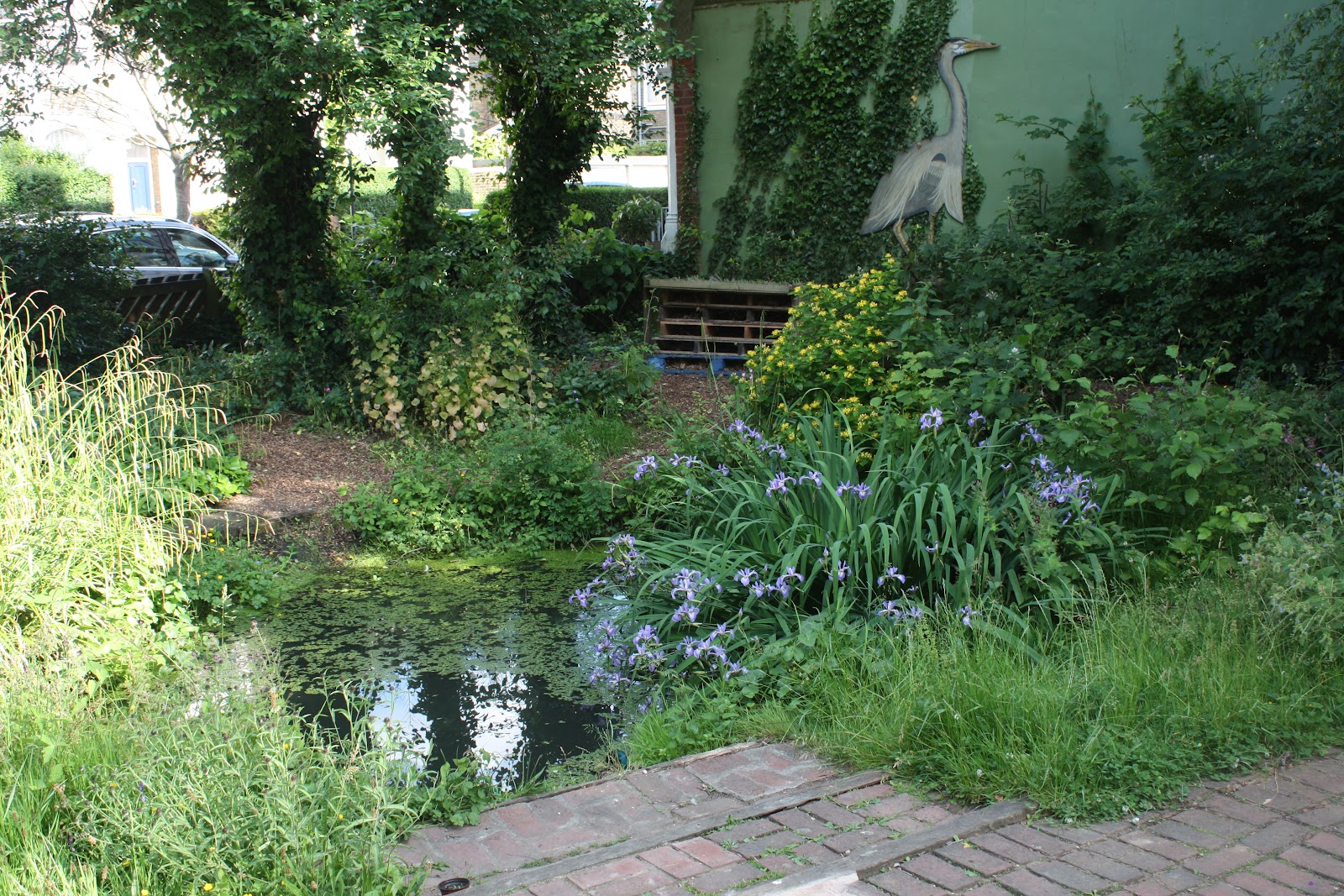 The Wildlife Pond and Woodland Area at Loris Garden

The community garden always had strong links with Lena Garden Primary School (until its closure in 2019) and in 1998, pupils from the school worked on a project to create a mosaic in the central paved area of the garden. The project included a Time Capsule, representing the positive and negative elements of society. The capsule, which is due to be opened in 2028 (which would have been the centenary year of the school), contains: a packet of wild flower seeds, a lottery ticket and a £2 coin – the latter two – both being new innovations at the time. To represent the negative side of life, a parking ticket and an asthma inhaler were chosen to be put inside the capsule. The time capsule event made the front page of The Guardian Society section.

In 2004, money was raised to create an Eco-Shed: comprising a small kitchen and office, a toilet and tool shed. The building construction has very sustainable credentials, including a green (sedum) roof. Much of the maintenance of the site is undertaken by one of our volunteers, Hughie, who has been immortalised in a mural on the gable end of 25 Batoum Gardens, as part of the 30th anniversary celebrations in 2014. Monthly volunteer, work days are held on the first Sunday of each month and all are welcome. The next session will take place on 7th June 2020. Please do contact us by email at: info@hcga.org.uk if you would like to get involved. 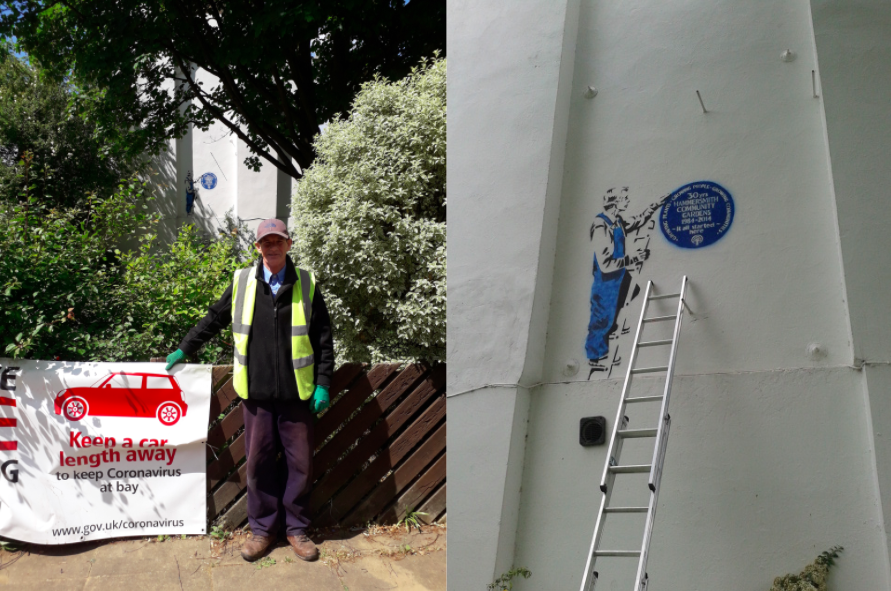 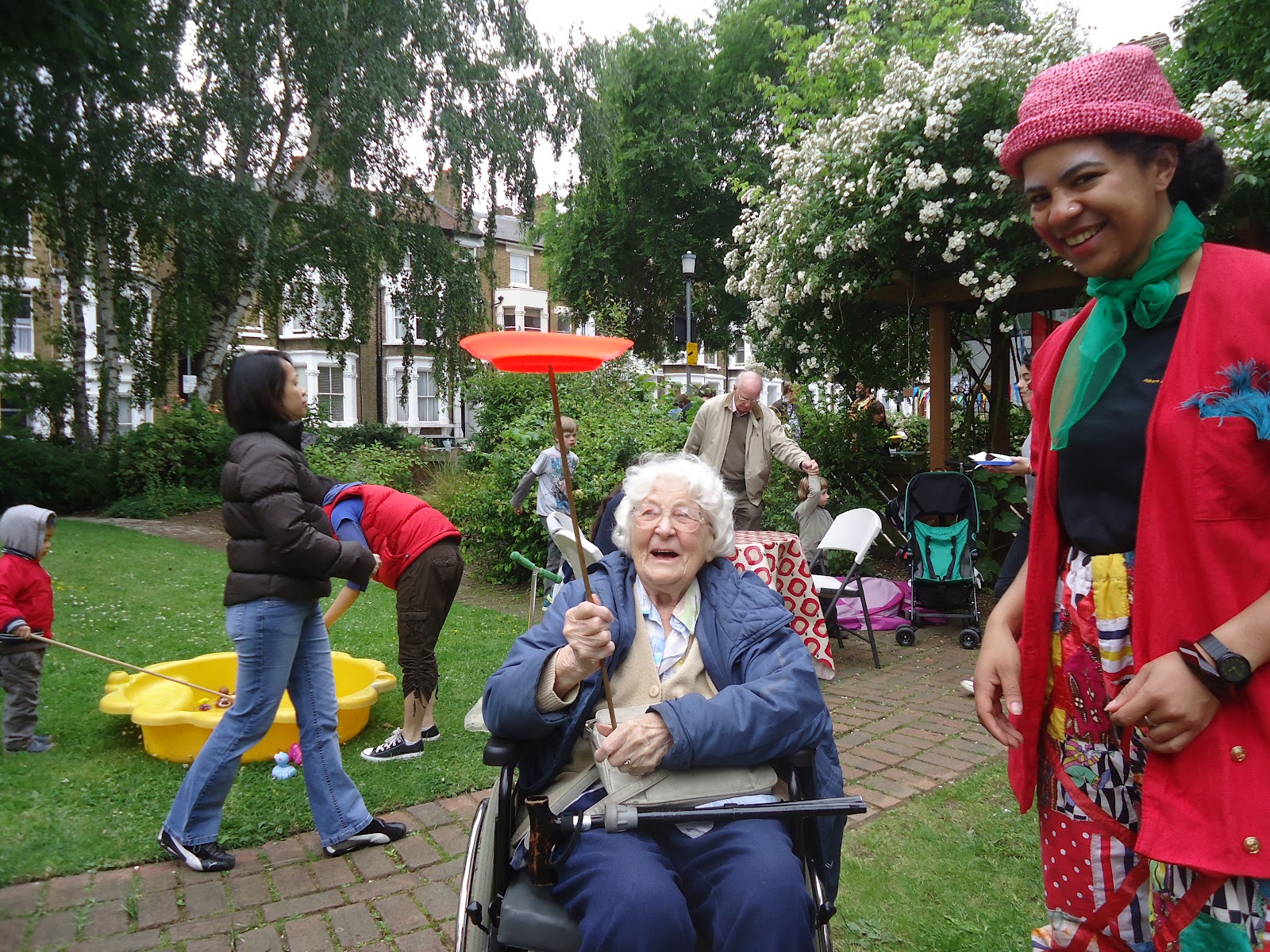 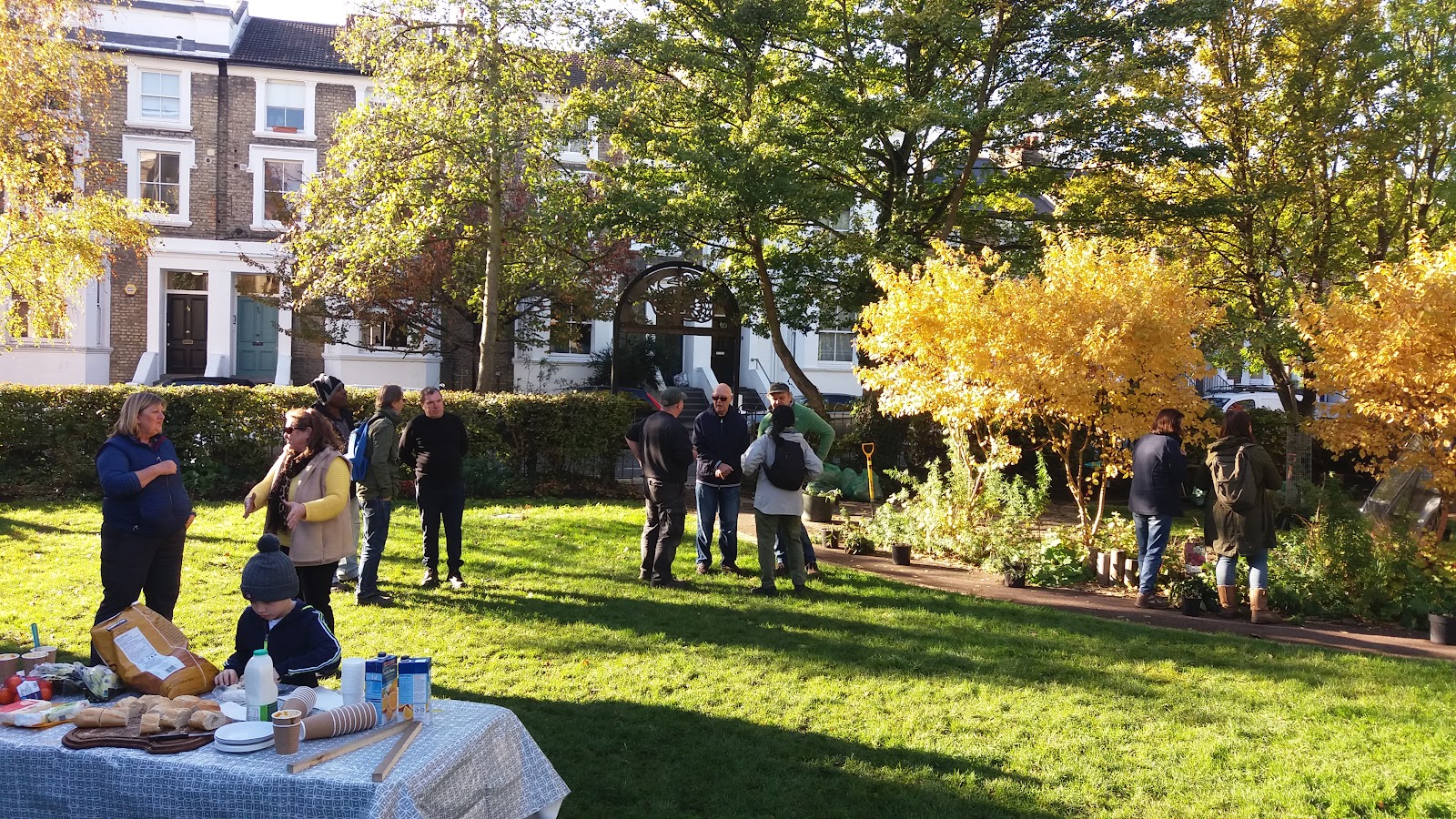 Autumn Planting Day at Godolphin Garden in 2018: In Memory of Dave Hills, a Former Volunteer Caretaker of the Garden

Following the success of Loris Garden, the council identified the space between St Stephen’s Avenue and Godolphin Road as a suitable site for the creation of a second community garden and work commenced in 1988. Many of the elements that were successful at Loris Garden were repeated at Godolphin Garden and during the initial stages, Mrs Southerden and her class, from nearby Miles Coverdale Primary School, worked to create the garden and local residents dug the pond. The layout of this site is simpler and was designed to be lower maintenance.The main landscaping of the site took place in 1995 and again included a Time Capsule, this time, encased within a hexagonal raised plinth in the centre of the garden.

Over the years, both gardens have been the inspiration for a number of arts and community events. One of the most spectacular, temporary art installations was a Tree Dressing Day (https://www.commonground.org.uk/tree-dressing-day/), when carnival artist, Carl Gabriel,  hung a series of carnival figures in the trees to span the millennium. 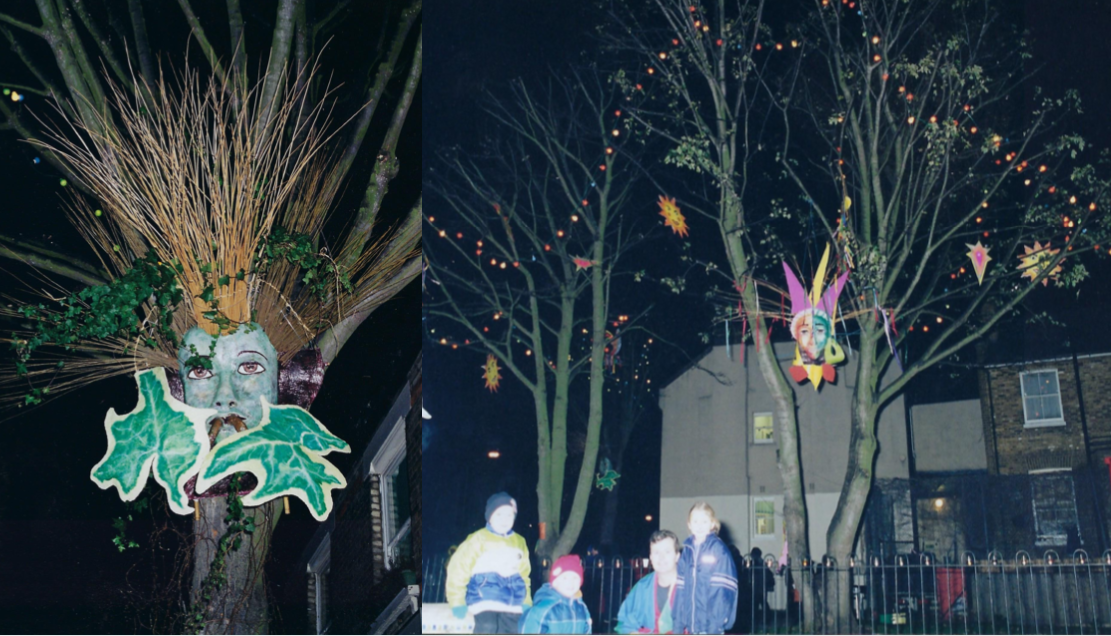 Previously, there was a community centre at 59 Godolphin Road, known as The Hut, which served as a base for HCGA. When this was sold in 2007, the obvious solution was to fundraise and build another Eco Shed in the garden. We used the same company who had built the shed at Loris: Eco-libruim Solutions. In keeping with their green credentials, they decided it was more sustainable to undertake construction off-site, then transport it to its final destination. This building has a rubble roof with sedum plants which are both good for wildlife. 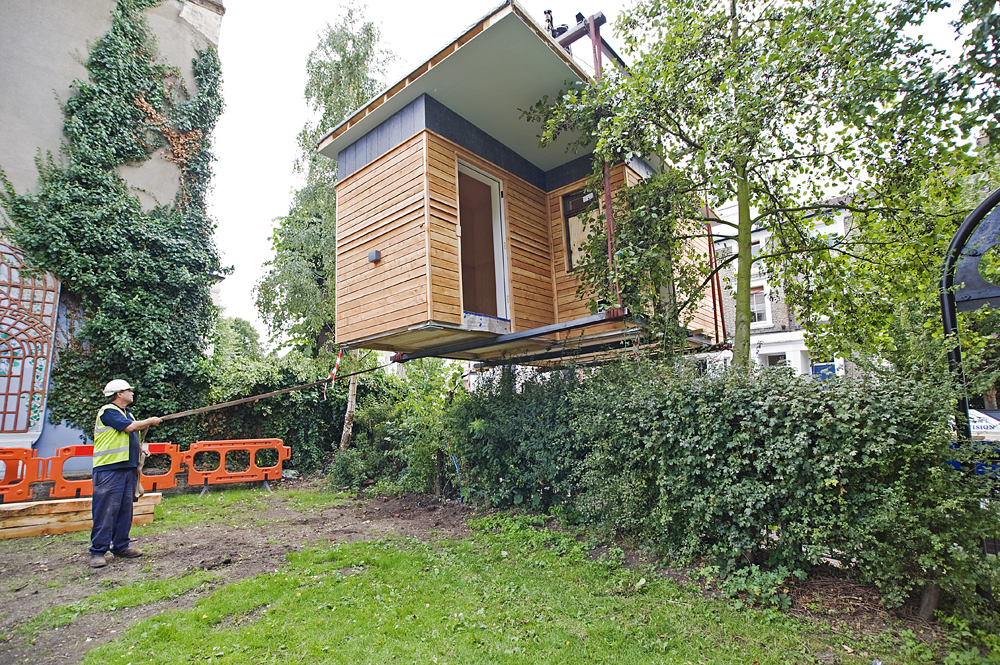 The Eco Shed is the base for one of our volunteering projects, Get Out There! who meet every Friday to maintain the gardens and other local sites. In 2016, we also launched a Men in Sheds Project where participants can undertake their own projects during the week.

The Glasshouse Mural was created in 1999 by artist Jim Torrance. He worked with pupils from Miles Coverdale School, who visited Shepherd’s Bush Market, and used the tropical fruit sold there as inspiration for the plants in the mural. The children’s drawings were scaled up and stencilled onto the wall.

Before and After the Mural was Created in 1999

The mural is now in need of a bit of TLC which had been planned for this summer when the Time Capsule, in the garden, was also due to be opened, but for now that is on hold.

Other Sites in the Borough

For several years, HCGA has co-ordinated the community growing beds in Normand Park which can be seen in the photo below. In 2018, HCGA was asked to assist local residents at Woodman Mews, with a complete makeover of a very neglected community garden. This was done through the co-ordination of several corporate team-building days and with HCGA’s Get Out There! team working alongside local residents. 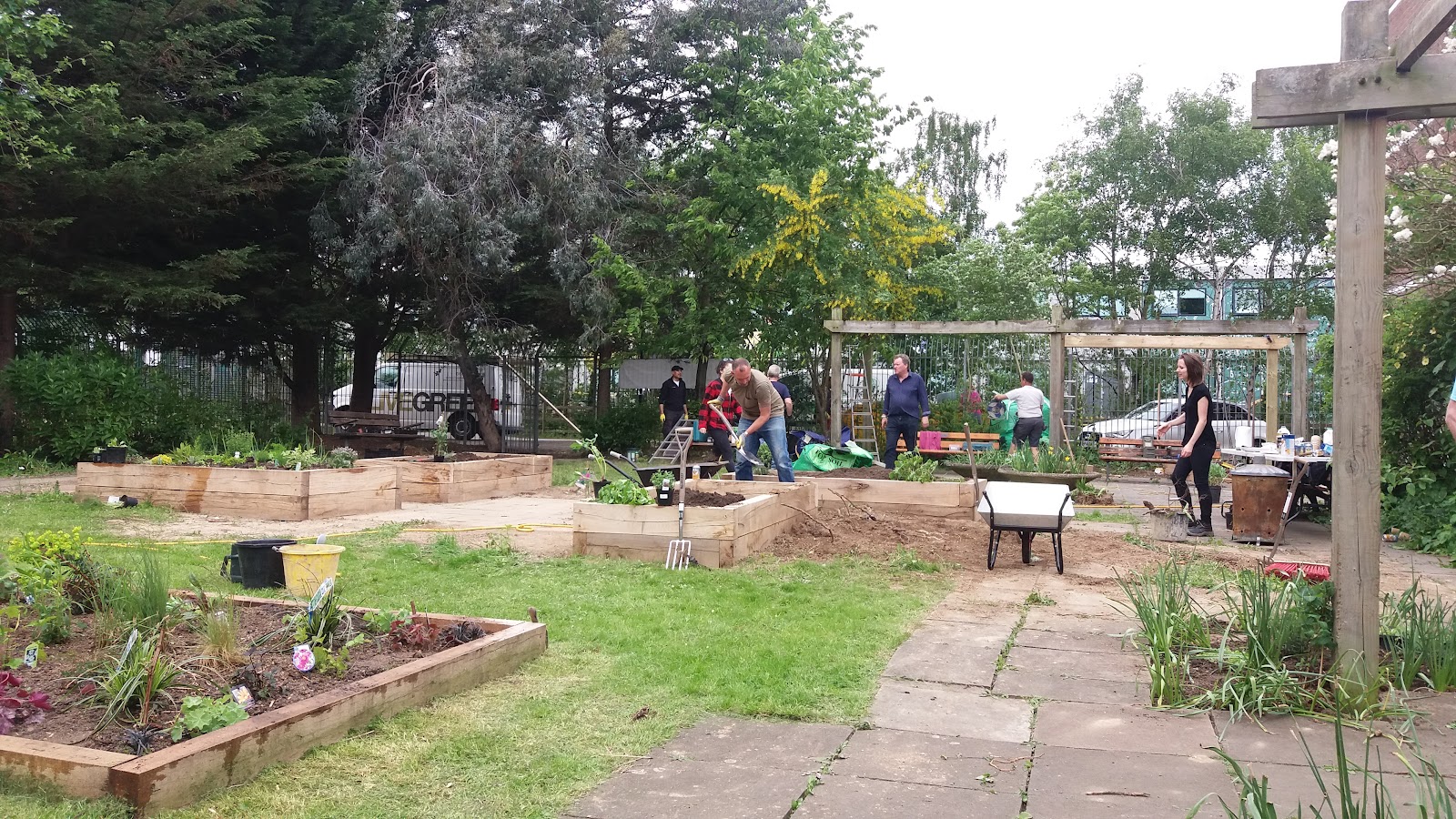 For the past twenty years, HCGA have run (with funding from BBC Children in Need) school holiday nature-themed play schemes in Loris Garden, Godolphin Garden and at Ravenscourt Glasshouses. The play schemes are aimed at families who may not have their own garden so it gives their children the opportunity to explore and connect with nature. During the summer play schemes, we always have a mud kitchen and water play area for children to experience messy play, which many parents may not have the capacity to do at their own home but it is an experience that most children absolutely love. At all three sites, during our play schemes, there are a variety of gardening tasks like seed sowing, planting and watering, as well as, nature-craft activities and children are able to experience pond dipping where they can discover various species of pond life and learn how to identify them.

Wildlife at Loris and Godolphin Gardens

As both gardens have wildlife ponds and a wide variety of plants; this provides food and drinking water for pollinating insects and overall, increases the amount of biodiversity in the area. Some of the animals spotted include: foxes, ducks, frogs, toads, many bird species, bees and other pollinators. 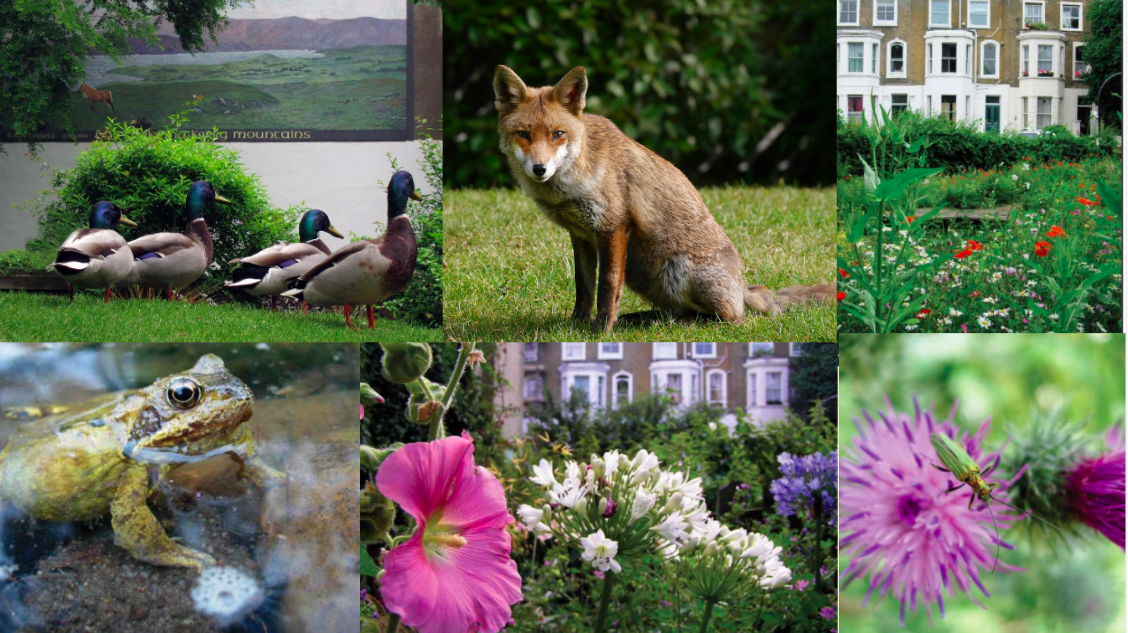 Some of the Plants and Wildlife at Loris and Godolphin Gardens (Photo Credit: Suzie Meader)

We would like to thank Hammersmith United Charities and United in Hammersmith and Fulham for their support during these challenging times of Covid19.

Hammersmith Community Gardens Association is a local environmental charity set up in 1984, we manage four community gardens in Hammersmith and Fulham.

No posts were found for provided query parameters.